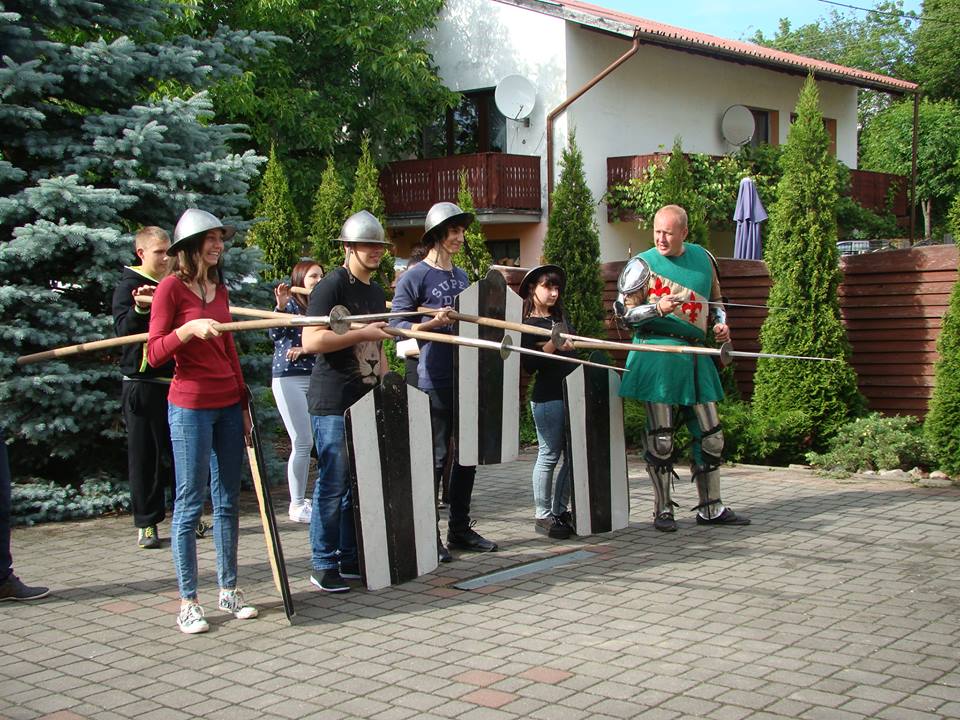 Between 22 June and 1 July 2015, a “Follow history – Medieval mysteries” youth exchange took place in Gniew. 32 people from Poland, Romania and Bulgaria took part in this project.

Irish philosopher and politician Edmund Burke stated in the 18th century: “No European can be a complete exile in any part of Europe.” This statement contains the essence of European history from the beginning of its development. Over the centuries, the peoples inhabiting this small continent mingled, fought for lands, formed alliances and continuously developed. This melting pot of tribes, and nations later on, led to the creation of the European Union in its current form. The Middle Ages was a period when, on the ruins of the Roman Empire, the borders between states began to strengthen, and the time when tribal communities expanded their importance and increased their range.

The aim of this year’s project edition was to disseminate knowledge on the medieval history of Europe. All participants shared with each other how, from their point of view, the Middle Ages period looks like in their native historiosophy. During practical classes, the participants learned about the Middle Ages traditions, including, for example, traditional craft or interpersonal relations. The exchange of experiences, perception of history and practical workshops helped to build better relations between the participants on both private and cultural grounds. During ten days of the exchange, some medieval classes and workshops were held. They were led by the members of the Chorągiew Zaciężna Apis under Grand
Master Jacenty from Ordów, who took the participants of the exchange back in time to the Middle Ages (clothing, behavior, language and activities characteristic of that era). During the workshops, we repeatedly raised the questions related to intercultural education, including the history and culture of the Middle Ages. We want to share the gained knowledge with others which is why we spent the last days of our meeting creating a film in which project participants went back in time to the Middle Ages and recreated elements of life from that period – they learned forging, medieval dances, horse riding, knight fights, how to win a lady’s heart and they had the opportunity to live in the castle together with the ghost. The workshops were run using the informal educational methods, ie. language animation, games that allow building trust and cooperation in a group, dancing, integration games, activating methods, work in international groups, discussion, individual reflection on daily activities, music classes and practical classes. The program stimulated reflection on the differences in values, traditions and world views, and the work in multinational groups contributed to counteracting racism and xenophobia because we are most afraid of what is unknown and unfamiliar.

We would like to express our special thanks to our hospitable and kind friends from Chorągiew Zaciężna Apis from Gniew, Hotel na Wzgórzu in Gniew and the Institute of National Remembrance in Gdańsk.

The project, under Erasmus+ Program, was funded with support from the European Union